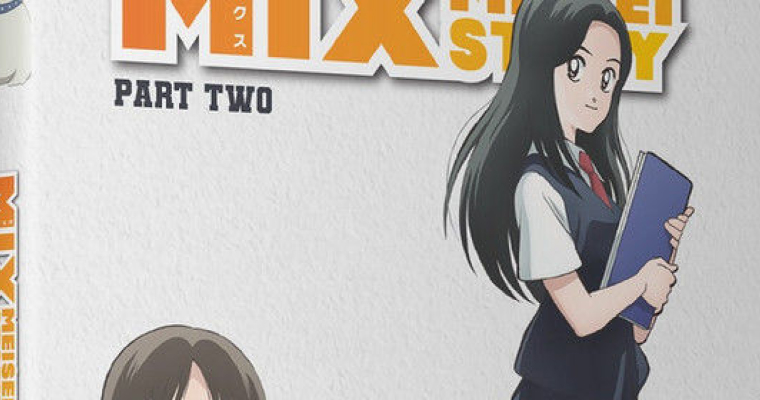 Mix Part 2 Blu-Ray Synopsis: Mix Part 2 Blu-Ray Meisei High School has made it farther in the national baseball tournament than they have in years, largely thanks to the talents of their battery, Souichiro and Touma Tachibana. They’re in the championship playoffs now, playing against talented teams where one small mistake can end their hopes of finally returning to Koushien after thirty years. The Tachibanas may have a complicated sibling relationship, but they’re not the only ones. Baseball is a psychological game, and insecurities and personal problems are just as likely to defeat you as your opponents’ skill. Review: I’ve never been much into baseball, and I’m starting to realize that’s a real disadvantage when watching baseball anime. Everything I know about sports, I’ve learned from anime, since many sports anime don’t assume familiarity with the rules or finer strategic points and are more than happy to explain them to their audience. Baseball, however, is massively popular in Japan, and because of this, those stories tend to assume familiarity with the sport. It’s kind of like how Friday Night Lights doesn’t sit down and define what “across the middle” or “blind side” means, and if you’re assuming I looked those terms up right now, you are absolutely correct.

Therefore, as Mitsuru Adachi’s Mix moved into its second half, I had to pay pretty close attention to understand what was actually going on. It’s not the kind of show where you can zone out during the sport segments, infer what’s going on from the characters’ emotions, and pay attention during the character-driven segments. Following Mix requires not just attention but active engagement in the sports segments, partly because that’s what makes the vast bulk of the screen time, and partly because that’s where the characters are most likely to express their subtle emotional states.

Now that they’re in high school, on a team with a coach that actually lets them play instead of insisting that they pay proper dues to the older but weaker team members, the Tachibana brothers can finally step onto the diamond, and the script must look to other sources of character drama and start interrogating sibling relationships. Not Touma and Souichiro’s, though, nor their relationship to Otomi, but the relationships of some of their rivals. Otomi just happens to be in the same class as the siblings of their two most fearsome rivals: a boy who likes her, and a girl who decides to wage a proxy rivalry with Otomi, who remains cluelessly pleasant.

It’s okay, but the shift in attention makes everything outside the games feel a bit half-baked and obligatory, like it was the only thing they could think to do with Otomi. It’s a strange choice since very few of the Meisei players have gotten any proper development. Instead of giving more personality to, say, the big guy with the fangs, we absolutely must know that Tomohito Akai, the rival pitcher, also has a stepbrother, but unlike the Tachibanas, they don’t get along and also the younger one has a big crush on Otomi, because everyone has a crush on Otomi.

While Mix may treat its male characters fairly well, it’s downright creepy when it comes to the young girls. There was a fair bit of fanservice in the first half, but it becomes worse and worse as the show goes. Otomi is in a swimsuit almost every time she appears, and the camera isn’t even remotely subtle about ogling her middle school body. One character takes a creepshot of her in her swimsuit, blows it up to larger than life-size, and posts it on his bedroom wall. Everyone is obsessed with her, including her brothers. It’s awkward and uncomfortable and, considering most of the series is characterized by understated subtlety, an element that leaves one of the strongest impressions due to just how blatant it is. Otomi isn’t the only fanservice subject – in one particularly shameless incident, an episode opens with a bunch of women frolicking in bikinis at the beach with lots of closeups of their legs, crotches, and breasts, even though they have absolutely nothing to do with the episode. The fact that it’s so incongruous with everything else about the series makes it all the more jarring and alienating.

She also looks like every single other Mitsuru Adachi heroine ever, and Touma and Souichiro look like every Adachi protagonist ever. It’s almost funny, because he clearly has no problem with varied character design – outside the main trio, there’s a lot of variety and everyone is easily distinguishable from each other… once you learn to tell the difference between Souichiro and Touma, that is. The two look different enough that once you can tell who is who, it’s not too hard to keep them straight, but it can be confusing at first. It’s like they really are the fraternal twins everyone assumes they are.

The baseball segments are quite strong, as one would expect from a work originally by a man who has been writing sports series for the better part of four decades. The bulk of effort in the animation goes into accurately recreating the highly technical aspects of the game, and their form looks good, at least in my extremely amateur opinion. Touma’s English voice actor Howard Wang even comments in one of the extras that he learned how to throw from working on the show. The games make up the vast bulk of the runtime in this latter half – no training arcs, no team bonding episodes, just straight from one game to the next. This storytelling style certainly won’t work for everyone, especially fans of more character-driven sports anime like Free! and Haikyuu!!, but those interested enough in baseball to pay active attention to the games will find it rewarding to watch.

The dub is solid enough, but as has so often been the case, I had a hard time enjoying it after watching an episode with voice actor commentary. I understand that English voice actors are very busy and can’t watch every series they work on, but commentary tracks almost always shatter even the slightest illusion of actor investment. In their commentary for episode 13, Aaron Dismuke, Howard Wang, and David Matranga offer no insight on the show or the characters they play; instead, they fill the air with inane prattle about how the character designs have big ears and anecdotes about peeing their pants during Little League games. The short “Take Me Out to the Ballgame,” where the English cast goes to a baseball stadium and talks to the camera in front of standees of the characters, is a bit more charming, but still reveals a lack of investment in anime when one comments that Mix is different from other sports anime because it’s really “about the characters”. I respect and support them as just people doing a job, but I don’t need to be reminded.

Mitsuru Adachi’s manga has never really taken off in the US, and it may be because his style takes so much engagement. Mix doesn’t tell a story about sports so much as it tells a story through sports, one about nostalgia, legacy and sibling rivalry. It’s not the easiest series to get into, especially if you don’t love baseball, but if this kind of storytelling appeals to you and you’re not put off by completely extraneous, intrusive fanservice, Mix is a home run.